It has been a year since I started blogging for the Undiscovered Networks project with my artist collaborator Carole Miles, and the project has really started to take on a life of its own now. So it's time to come back to this blog to have space to write about the other things I get up to in my artistic life! 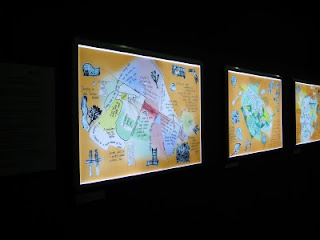 The big news is the completion of the Myth Maps project for Snibston Museum in Coalville, Leicestershire. The private view was held last month, bringing all the four commissioned artists (me, Geoff Broadway, Brendan Jackson and Paul Conneally) together to show their responses to Snibston the place, the collection, the people and the area. 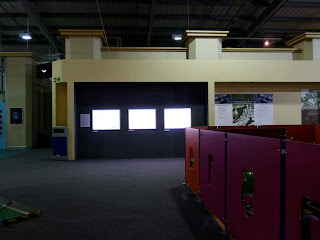 I was thrilled with the responses to my Myth Maps, which appear as three lightboxes which now hang in the Snibston Museum. Terrific to meet up again with four of the families who had taken part in my walks of discovery around the area (my Intrepid Explorers!), and to talk to them about the final results of the maps that I made. 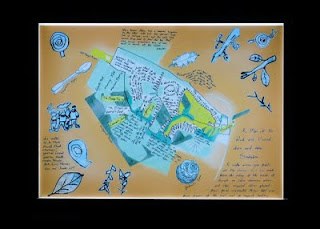 The odd thing about the Myth Maps is that they are not so much maps of a place that can be used and followed in the way that we are familiar with using maps. They are not about information and measuring space, but about recording a particular journey on a particular day with a particular group of people. They are a part of what I refer to as a phenomenological practice, a term used in research for a practice that accepts that in every instance that an action is taken the results will be different due to the wide number of unpredictable variables that will apply to each instance. In other words, no two walks are ever the same!

This has been one of the most pleasurable commissions I have ever undertaken. The commissioners were supportive but never interfering and I felt I was given total free rein to develop my work in my own way. The care that the Museum took in ensuring that my work was displayed well was excellent and overall a great experience. I feel that I have got to know the area around Snibston, Coalville and Ravenstone well and I have developed a particular affinity with that landscape.

I hope that the same will be said of the new commission that I am now working on, discovering the River Nene in Northamptonshire with a group of other artists. Visit Three Jos in a Boat for the story so far and watch out for more posts coming soon!

For the back story of the Myth Maps project, visit my previous blog posts here:
Preservation and persistance
New commissions and a little Coalville history
It's underneath our feet
Myth Maps in Snibston: story so far
Snibston lines and connections
Posted by Jo Dacombe at 21:20

Get blog updates straight to your Inbox: 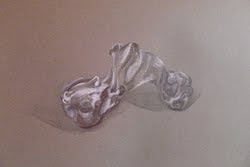